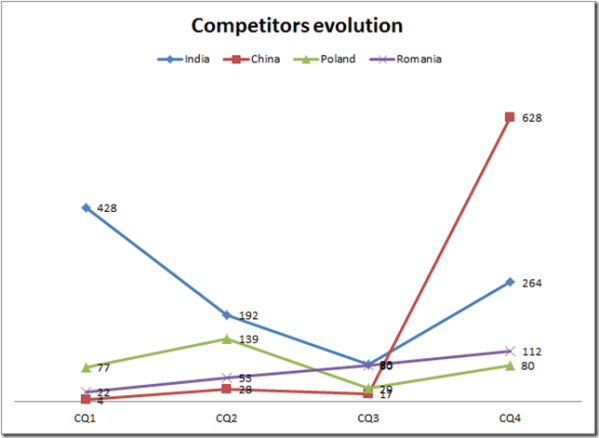 This article represents a personal analysis based on public information from the LeaderBoard. These interpretations have a personal and do not represent the official position of ImagineCup.

Top 15 – Country (by number of competitors)

Biggest surprise for Quiz 4 was the number of competitors from China and Netherlands. There is great revenue for Chinese students, a country with big tradition in IT challenge, and numerous positions on Final Podium. 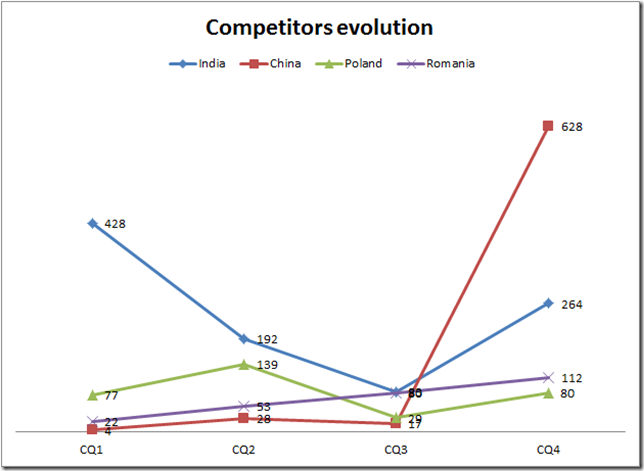 Competitors top is somehow identically with precedent one.

Q. Why is based on the sum of the top scores?

A. Because it is a criterion measure of competitiveness. The more you are involved in competition and better prepared you can get a bigger score and a better position in the rankings.

Australia 2012! But we first must finish First Round and after that Second round.

This article represents a collection of interviews and a couple of personal interpretations related to the history of the IT Challenge.

Technology is everywhere. The Microsoft Imagine Cup 2012 IT Challenge is geared to connect with students around the world who have the brainpower, interest, and technical knowledge to design, run, and support enterprise infrastructures while managing diverse customer needs and scenarios. The IT Challenge puts the world’s brightest IT minds to the test!

In the IT Challenge, students are tasked to develop, deploy, and maintain IT systems that are efficient, functional, robust, and secure. Each competitor needs to demonstrate proficiency in the science of networks, databases, and servers, as well as an intimate understanding of how it must all fit together, both on-premise and in the cloud. Sign up and get started today!

Short History of IT Challenge

(Name of all finalists are into a random order)

Stefan Plizga is the first time winner of the IT Challenge. Also, he is the one who gave birth to the most representative gesture of the IT Challenge competition, in which you work alone all the time. When he had the opportunity to say a few words, as the winner, he called all the finalists on stage.

Later this gesture was repeated by all the winners of the IT Challenge. The gesture is transmitted from generation to generation. The significance of this gesture is: A winner can’t be a real winner without competition as his value!

Details about 2007 Final Round on Rand’s Morimoto Blog: http://randsnet.blogspot.com/2009/06/imagine-cup-2007-seoul-korea-blog.html

In 2008 Thiago (aka Meme)was the was the youngest competitor in the history of IT Challenge. We liked very much like a television in Brazil did a very nice documentary about him.

The Anniversary Edition (5 years) of the IT Challenge was in the same time, the Edition with the largest number of participants in the Final Round.

In this edition appeared the first major changes in the competition: only one participant in each country in the final round; 10 finalists instead of 6.

At the same time it should be noted that in this final gathered the most active supporters of the competition: Sherif, Meme (Thiago), Roland and Cosmin, each of them with many posts on Imagine Cup Forum, nice interviews and promoting articles.

The 2010 Edition brings a new change in competition format. Due to budgetary limitations Microsoft with Head of Judges, Rand Morimoto, decided that the 2010 Final to be organized online.

We live in a world of the Internet and we have sufficiently mature tools for communication and remote working to enable such manifestations. We think that was a success and only for the fact that section went further.

Details about 2010 Online Final Round on Rand Morimoto Blog:

Back on-site, IT Challenge 2011 was really intense because there were first changes in Final Round requirements, including Azure configuration and Office 365 integration. Yon from Singapore was youngest competitor and first who fell asleep for 30 minutes in Final Round. But he manage to do all the best in last 4-5 hours of the competition and his results were really impresive. Quality of competition and competitors is becoming greater and greater year by year and Judge Role is very important and responsible in assuring a correct top of competitors. Thank’s to Rand and Chris who manage year by year all these great world wide competition.

At the Award ceremony, due to the limited time allocated to IT Challenge, Jean was unable to submit your message or to the world and at the same time there has been allowed to respect unwritten tradition of IT Challenge to call on stage all the contestants from Final Round.

Jean’s message is very impressive and deserve 2-3 minutes for reading.

Australia 2012! But we first must finish First Round and after that Second round. 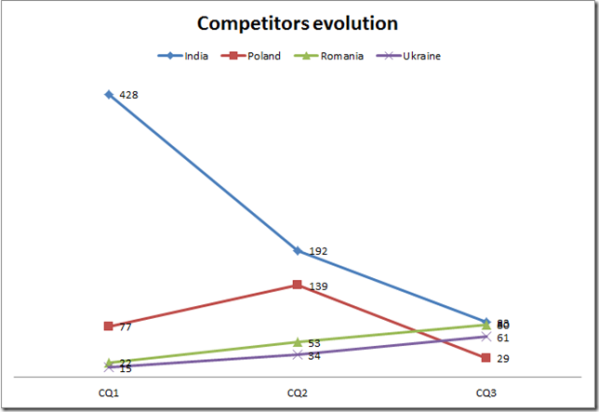 This article represents a personal analysis based on public information from the LeaderBoard. These interpretations have a personal and does not represent the official position of ImagineCup.

Top 13 – Country (by number of competitors)

In this top are missing this year, countries with tradition in IT Challenge such as Brazil and Egypt. We hope in a spectacular comeback for the last test. New countries in the Top are Ukraine, Estonia and Turkey. A big welcome and congratulations for organizers and ADE. 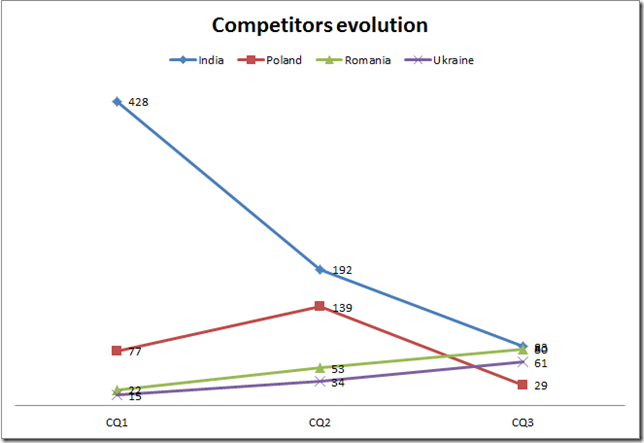 The great number of participants, from India, in the Quiz 1 reflected the process of selection for the MSP. This technique can be used in the processes of selection of the MSP and in other countries because IT Challenge covers a wide range of technical products from Microsoft: the servers, clients area and area of cloud-computing.

Q. Why is based on the sum of the top scores?

A. Because it is a criterion measure of competitiveness. The more you are involved in competition and better prepared you can get a bigger score and a better position in the rankings.

eljiudia (Romania) has obtained the highest score of the current edition, but ESI60596 (France) has the best average of scores. Last year the highest score was 28. We expect to see an improvement of the results in the following quizzes.

Why to participate in IT Challenge?

For more details about how to participate in IT Challenge please visit our official web page. Also we are appreciate your "Like" on our Facebook page. Imagine Cup is the world’s premier student technology competition. Already more than 300,000 students from more than 142 countries have competed. Join Today!!